The history of writing

The history of writing traces the development of expressing language by letters or other marks and also the studies and descriptions of these developments. In the history of how writing systems have evolved in different human civilizations, more complete writing systems were preceded by proto-writing, systems of ideographic or early mnemonic symbols (symbols or letters that make remembering them easier).

True writing, in which the content of a linguistic utterance is encoded so that another reader can reconstruct, with a fair degree of accuracy, the exact utterance written down, is a later development. It is distinguished from proto writing, which typically avoids encoding grammatical words and affixes, making it more difficult or even impossible to reconstruct the exact meaning intended by the writer unless a great deal of context is already known in advance. One of the earliest forms of written expression is cuneiform.

The origins of writing appear during the start of the pottery-phase of the Neolithic, when clay tokens were used to record specific amounts of livestock or commodities. 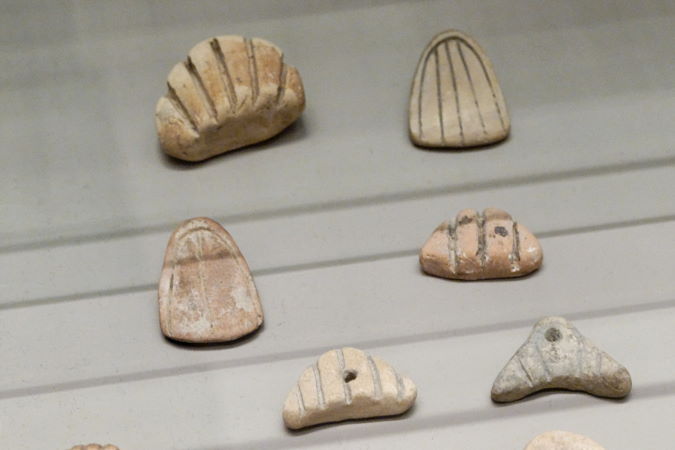 These tokens were initially impressed on the surface of round clay envelopes and then stored in them. The tokens were then progressively replaced by flat tablets, on which signs were recorded with a stylus. Actual writing is first recorded in Uruk, at the end of the 4th millennium BC, and soon after in various parts of the Near-East.

An ancient Mesopotamian poem (Sumerian epic poem Enmerkar and the Lord of Aratta. Circa 1800 BC) gives the first known story of the invention of writing: Because the messenger's mouth was heavy and he couldn't repeat the message, the Lord of Kulaba patted some clay and put words on it, like a tablet. Until then, there had been no putting words on clay.

Scholars make a reasonable distinction between prehistory and history of early writing but have disagreed concerning when prehistory becomes history and when proto-writing became "true writing." The definition is largely subjective. Writing, in its most general terms, is a method of recording information and is composed of graphemes, which may, in turn, be composed of glyphs.

The emergence of writing in a given area is usually followed by several centuries of fragmentary inscriptions. Historians mark the "historicity" of a culture by the presence of coherent texts in the culture's writing system(s).

The invention of writing was not a one-time event but was a gradual process initiated by the appearance of symbols, possibly first for cultic purposes.

Sumer, an ancient civilization of southern Mesopotamia, is believed to be the place where written language was first invented around 3200 BCE.

Writing was long thought to have been invented in a single civilization, a theory named "monogenesis". Scholars believed that all writing originated in ancient Sumer (in Mesopotamia) and spread over the world from there via a process of cultural diffusion. According to this theory, the concept of representing language by written marks, though not necessarily the specifics of how such a system worked, was passed on by traders or merchants traveling between geographical regions.

However, the discovery of the scripts of ancient Mesoamerica, far away from Middle Eastern sources, proved that writing had been invented more than once.

Scholars now recognize that writing may have independently developed in at least four ancient civilizations: Mesopotamia (between 3400 and 3100 BCE), Egypt (around 3250 BCE), China (1200 BCE), and lowland areas of Southern Mexico and Guatemala (by 500 BCE). 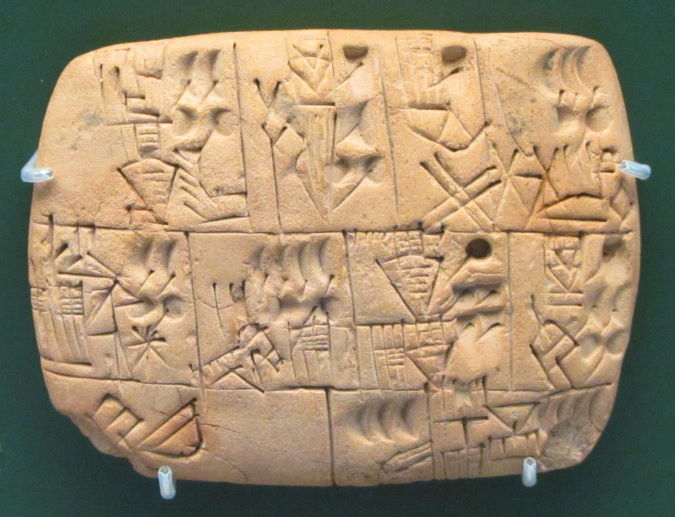 Regarding Egypt, several scholars have argued that "the earliest solid evidence of Egyptian writing differs in structure and style from the Mesopotamian and must therefore have developed independently. The possibility of 'stimulus diffusion' from Mesopotamia remains, but the influence cannot have gone beyond the transmission of an idea."

Regarding China, it is believed that ancient Chinese characters are an independent invention because there is no evidence of contact between ancient China and the literate civilizations of the Near East, and because of the distinct differences between the Mesopotamian and Chinese approaches to logography and phonetic representation. Debate surrounds the Indus script of the Bronze Age Indus Valley civilization, the Rongorongo script of Easter Island, and the Vinča symbols dated around 5,500 BCE. All are undeciphered, and so it is unknown if they represent authentic writing, proto-writing, or something else.

The Sumerian archaic (pre-cuneiform) writing and Egyptian hieroglyphs are generally considered the earliest true writing systems, both emerging out of their ancestral proto-literate symbol systems from 3400–3100 BCE, with earliest coherent texts from about 2600 BCE. The Proto-Elamite script is also dated to the same approximate period.

Cippus Perusinus, Etruscan writing near Perugia, Italy, is the precursor of the Latin alphabet.

The Phoenician alphabet is simply the Proto-Canaanite alphabet as it was continued into the Iron Age (conventionally taken from a cut-off date of 1050 BC.) This alphabet gave rise to the Aramaic and Greek alphabets. These in turn led to the writing systems used throughout regions ranging from Western Asia to Africa and Europe.

For its part the Greek alphabet introduced for the first-time explicit symbols for vowel sounds. The Greek and Latin alphabets in the early centuries of the Common Era gave rise to several European scripts such as the Runes and the Gothic and Cyrillic alphabets while the Aramaic alphabet evolved into the Hebrew, Arabic and Syriac abjads, of which the latter spread as far as Mongolian script.

The South Arabian alphabet gave rise to the Ge'ez abugida. The Brahmic family of India is believed by some scholars to have derived from the Aramaic alphabet as well. 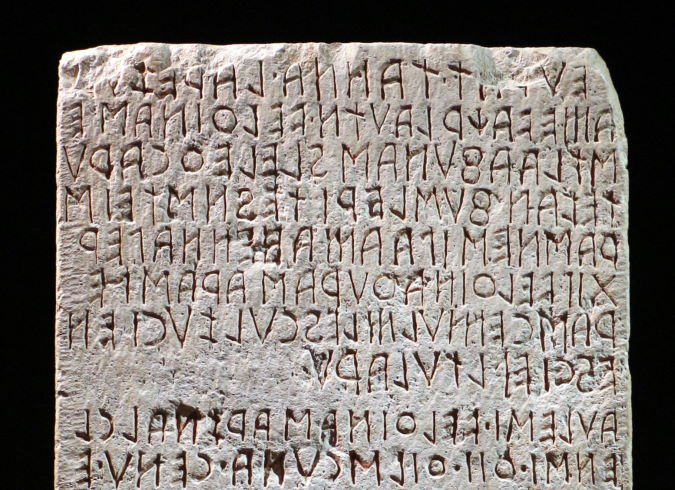 Writing in the Greco-Roman civilizations

The history of the Greek alphabet began in at least the early 8th century BCE when the Greeks adapted the Phoenician alphabet for use with their own language. The letters of the Greek alphabet are more or less the same as those of the Phoenician alphabet, and in modern times both alphabets are arranged in the same order. The adapter(s) of the Phoenician system added three letters to the end of the series, called the "supplementals". Several varieties of the Greek alphabet developed. One, known as Western Greek or Chalcidian, was used west of Athens and in southern Italy. The other variation, known as Eastern Greek, was used in present-day Turkey and by the Athenians, and eventually the rest of the world that spoke Greek adopted this variation. After first writing right to left, like the Phoenicians, the Greeks eventually chose to write from left to right.

Greek is in turn the source for all the modern scripts of Europe. The most widespread descendant of Greek is the Latin script, named for the Latins, a central Italian people who came to dominate Europe with the rise of Rome.

The Romans learned writing in about the 5th century BC from the Etruscan civilization, who used one of a number of Italic scripts derived from the western Greeks. Due to the cultural dominance of the Roman state, the other Italic scripts have not survived in any great quantity, and the Etruscan language is mostly lost. 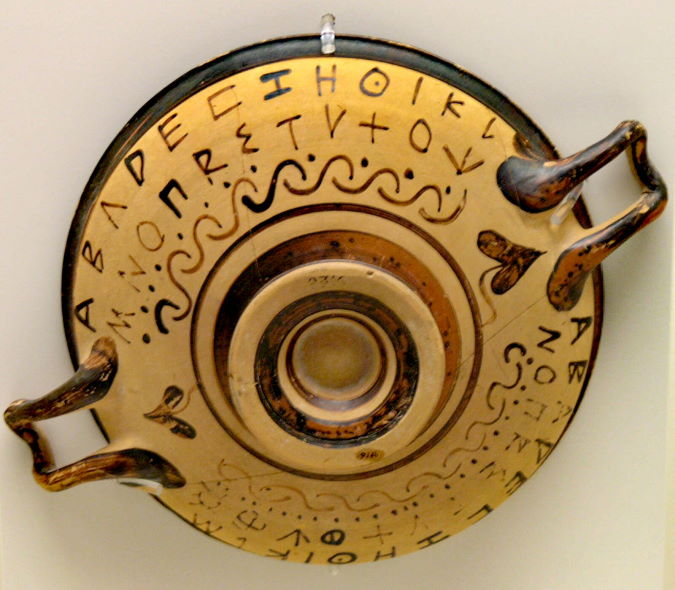 Writing during the Middle Ages

The rise of Islam in the 7th century led to the rapid rise of Arabic as a major literary language in the region. Arabic and Persian quickly began to overshadow Greek's role as a language of scholarship. Arabic script was adopted as the primary script of the Persian language and the Turkish language. This script also heavily influenced the development of the cursive scripts of Greek, the Slavic languages, Latin, and other languages. The Arabic language also served to spread the Hindu–Arabic numeral system throughout Europe. By the beginning of the second millennium the city of Cordoba in modern Spain, had become one of the foremost intellectual centres of the world and contained the world's largest library at the time. Its position as a crossroads between the Islamic and Western Christian worlds helped fuel intellectual development and written communication between both cultures. 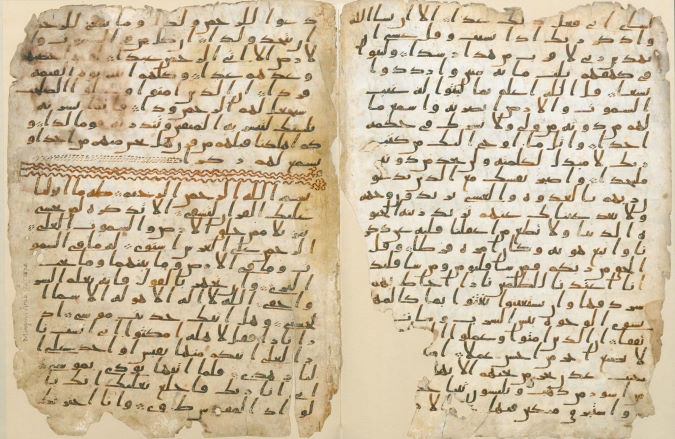 Arabic from the Quran in the old Hijazi dialect
By Anonymous - https://www.nytimes.com/2015/07/23/world/europe/quran-fragments-university-birmingham.html?_r=0, Public Domain,
https://commons.wikimedia.org/w/index.php?curid=41768466

Renaissance and the modern era

By the 14th century a rebirth, or renaissance, had emerged in Western Europe, leading to a temporary revival of the importance of Greek, and a slow revival of Latin as a significant literary language. A similar though smaller emergence occurred in Eastern Europe, especially in Russia. At the same time Arabic and Persian began a slow decline in importance as the Islamic Golden Age ended. The revival of literary development in Western Europe led to many innovations in the Latin alphabet and the diversification of the alphabet to codify the phonologies of the various languages.

The nature of writing has been constantly evolving, particularly due to the development of new technologies over the centuries. The pen, the printing press, the computer and the mobile phone are all technological developments which have altered what is written, and the medium through which the written word is produced. Particularly with the advent of digital technologies, namely the computer and the mobile phone, characters can be formed by the press of a button, rather than making a physical motion with the hand.

The nature of the written word has recently evolved to include an informal, colloquial written style, in which an everyday conversation can occur through writing rather than speaking. Written communication can also be delivered with minimal time delay (e-mail, SMS), and in some cases, with an imperceptible time delay (instant messaging). Writing is a preservable means of communication. 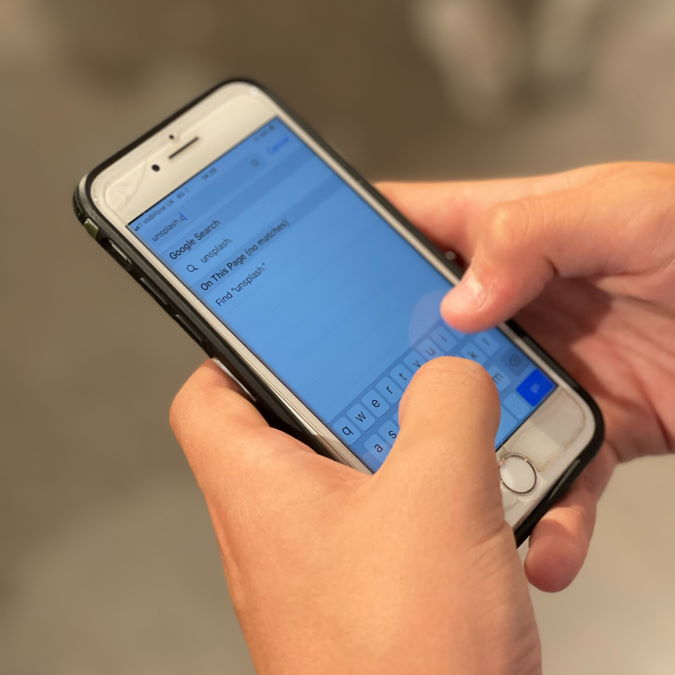